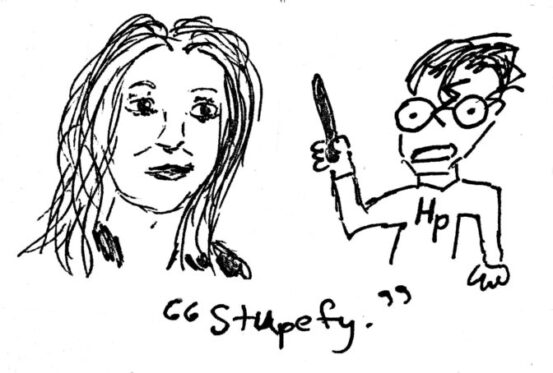 I’m going to say it: I have never liked Harry Potter! I know, I know; you’re thinking to yourself: “…but Megan, you’re a mother of three beautiful, intelligent, sweet daughters and two hunky sons—and you’re looking great for it by the way—surely you appreciate what Harry Potter has done for young readers?”

Yes, yes I do. For years we’d sit down with the kids before bedtime, in our pjs, and play the Harry Potter audio books. I’m acquainted with their appeal and literary genius. Nevertheless, like many of the classics, the Harry Potter books just haven’t ever appealed to my sensitivities as a literary woman.

I’m not blind to the fantastical. I don’t let my intellect get in the way of enjoying the supernatural. I’m deeply in-touch with my spiritual side. I’ve encouraged my children to explore their inner selves also. Each morning the kids and I wake up at the crack of dawn to greet the sunrise, barefoot. We ground ourselves into our luxury artificial grass and feed from the natural magnetic energy emanating from the Earth. Two of my daughters and I have already synchronized our cycles with the lunar phases; my youngest daughter is, alas, still too young to menstruate, but she has expressed her interest in following suit.

Until recently, my only problem with J.K Rowling was that she hadn’t made Hermione the star of the magic books, which, for one of our greatest living feminists, struck me as a missed opportunity for all the young girls of America.

I know, I’m prejudiced, but I saw so much of myself in Hermione: I was often made fun of for my intelligence (I was a bit ahead of my time). Although I was substantially prettier than her when I was her age, I could relate to Hermione’s loneliness because, while I was the subject of many a high-school athlete’s attention, they never really got me. We were both lonely, Hermione and me—just in different ways.

Yet recent events have totally changed my opinion of the author of Harry Potter. According to a manifesto she posted on her website, Rowling—who sometimes writes under the pen-name Robert Galbraith (who has nothing to do with Robert Galbraith Heath, a psychologist and major proponent of gay conversion therapy)—discovered that she was facing backlash from her fans because she “liked” the page of the now-deceased anti-trans radical feminist Magdalena Berns (who had a penchant for raising the “Jewish question”).

According to Rowling’s think piece, she was researching trans issues for a book she was writing when she stumbled on the doomed feminist’s hot Twitter takes. Rowling managed to contact Berns, who was suffering from a terminal brain tumor, to offer her support for arguing the case of biological sex.

She also said that while researching trans abuse, instead of snapping a screenshot of examples, she would accidentally “like” them instead. O.K., Boomer?

I was so excited when Rowling announced retroactively that Albus Dumbledore and some other wizard guy had a “sexual dimension” to their relationship. I totally understood why, in the early 2000s, she’d have been ostracized for writing about two men in a gay relationship, and so had to wait until social trends caught up with her progressive values before she could reveal her intentions.

Women have always been shut down, especially those worth a lot of money. Men hate to see women succeed. Indeed, I must admit, my husband scoffed at my idea of becoming a luxury children’s party planner. But ten years later, it now pays for our vacation getaway in Vancouver.

Rowling had, against the odds, broken the chains of her impoverished upbringing to write a bunch of okayish books and make a platform for herself. Next to Hillary, there were few women I admired more than Rowling, even if her books were a little on the dull side.

Regardless, she has just taken a massive shit all over her legacy of essential contributions to the LGBTQ+ community. By saying that trans woman aren’t women, she’s effectively saying that no little boy can have dreams of becoming the first female POTUS.

She also claims that because she was raped, she understands womens’ fears of using public restrooms, where there might lurk a predatory trans person, ready to pounce!

I’m fortunate never to have been the victim of sexual abuse, though when Cheeto-Hitler stole the election from Hillary, I felt that he’d done more to the women of America than grab us by the pussy. I felt that abuse. Yet I realized that I couldn’t let that abuse haunt my decisions.

Rowling’s TL;DR manifesto against trans women serves to legitimize that disgusting, evil, dishonest, fake-tanned, small-handed, tiny-dicked scumbag who is pretending to run the country right now: #NotMyPresident #PutinPuppet. That is her most unforgivable crime.

Donald Drumpf has gained political leverage by abusing and disenfranchising trans people. When he pulled them from active duty, a tear ran down my eye for all those brave men and women and trans men and trans women who are eagerly and wonderfully protecting our country from our enemies. They’re fighting them over there so we don’t have to fight them over here, in West Hills, LA.

I won’t lie—this wasn’t the only occasion when I have shed a few tears for our brave U.S. trans people. I’ve become very emotional about all this; it’s affected me quite substantially in my home and family life. I can’t blame Rowling for all of it—that blame lies squarely on the porch of the White House!

The COVID-19 pandemic has been so tough for me—you never really realize how big your eight bedroom estate is until you’re stuck there day-in, day-out. Thankfully, now that lockdown is being eased, the Hubby and I are planning to move to our Huntington Beach estate so we can get away from all the protests and stuff.

There, my girls can work on their tans and make their POV TikToks, while my muscular boys can work out on our private beach and record their progress for their fitness YouTube™ channels. The sunlight and surroundings will make the perfect backdrop for them and the exclusive content they provide their fans on a website called OnlyFans™—I have no idea. I confess, like Rowling, I can be technologically naïve to all the hip new trends.

The J.K Rowling thing has just been the icing on a very unpleasant cake for me and my family. Though I don’t know any trans women, I hope one day to claim that honor. That’s why I’m preemptively feeling their pain, ready to sling an arm of solidarity around their broad shoulders and tell my future besties, “It’s okay. Everything will be okay.”

I must end this, as even writing about this subject makes me very emotional for my future trans friends. All I can really say in conclusion is that I’ve decided on an epitaph for the writer of the heterosexual white book series, Harry Potter:

Joanne K. Rowling, YOU ARE THE REAL VOLDEMORT!

Megan McCann splits her time between West Hills, LA and Huntington Beach. When she isn't writing for Thinq, she plans parties for opulent children.